Most people want their salmon with a crisp golden crust. Not me. Well, not all the time. One of my favorite ways to cook salmon is poaching, and the en papillote method yields a very similar result—tender and juicy and not at all oily, like salmon can sometimes be. The cherry tomatoes in the bundle make the fish even better, adding a little tartness to cut the richness.

In my cookbook, Just Cook It!: 145-Built-To-Be-Easy Recipes That Are Totally Delicious, I write all about my love for this classic French technique. It’s one of my favorites takeaways from culinary school. So much so that I use it probably once a week for cooking fish. And, believe it or not, it’s actually way more practical than you might think. First of all, it keeps everything contained, that way you aren’t splattering fishy oils all over the kitchen. Second, because you’re essentially steaming the fish, it’s pretty healthy. Lastly, it cuts way down on the clean-up. Seriously, you literally toss the cooking vessel in the compost.

The following guidelines aren’t just for this amazing salmon dinner. Use them to create your own recipes at home.

Parchment paper is coated to prevent sticking, which is ideal for delicate fish fillets. In a pinch, aluminum foil works well, too. you should use a larger- than-you-think sheet of parchment (I prefer ones that are 15 inches in length for an individual packet) because once you start layering your ingredients, it’s easier to cut off any excess than to transfer everything to a new sheet if it’s not big enough. Plus, you want enough paper to fold over the ingredients so that there’s just enough room for the steam to rise.

Less is more when cooking en papillote: The more you squeeze into your parcel, the harder it is to wrap up. Start by choosing your fish and then pair it with ingredients that complement its flavor. If you choose a fattier fish, like salmon, choose more acidic ingredients (tomatoes, citrus) for balance. Likewise, lean fish, like sea bass, pairs well with ingredients that get juicy when steamed, like zucchini and mushrooms.

Harness the Power of Herbs

Jack up the flavor of your parcels with herbs sprigs, like basil and cilantro. you can easily pick them out at the end when they’re wilted. alterna- tively, sprinkle on chopped fresh herbs.

Parchment can be a little tricky to use at first, but you’ll get the hang of it. Just arrange sheets on a work surface and pile ingredients on one half. Fold the parchment over the ingredients and then, starting at one end, fold over the edge and crimp to seal. Continue folding over and crimping the edge at 1-inch intervals until you reach the opposite end, then twist the corner to make it airtight.

Always bake your parcels on a large rimmed baking sheet. It’s easier to move them about and you prevent any totally avoidable mishaps. Once you get them in a hot oven (I’m talking 425°F) leave them alone for usually around 10 to 15 minutes until they’re super puffy, which generally is your sign that the ingredients are cooked. Snip open the packets with scissors (be careful of the steam) and serve in the parchment, or just slide everything onto a plate.

Typically when cooking en papillote, it’s more common to make individual packets—they’re easier to move around and serve. But because I’m the adventurous type, I often make one outrageously oversized packet packed with enough ingredients to serve four. For this method, I use a 3-foot-long sheet of parchment and up the cooking time by about 5 minutes.

Once you’re ready to cook and have assembled all of your ingredients, forming the parchment packet isn’t hard at all. Follow these easy steps: 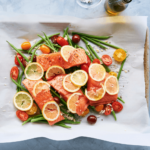 SALMON WITH HARICOTS VERTS & TOMATOES IN PARCHMENT is excerpted from JUST COOK IT! © 2018 by Justin Chapple. Photography © 2018 by David Malosh. Reproduced by permission of Houghton Mifflin Harcourt. All rights reserved.
Did you make this recipe?Tag @justinchapple and hashtag it #justinchapple on Instagram.
Dinner Seafood Uncategorized

END_OF_DOCUMENT_TOKEN_TO_BE_REPLACED 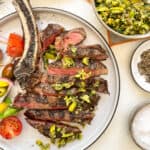